Families of Parishes as Evangelizing Communities

How does a parish share the good news of Jesus?

Last month, I reflected on the Church as the Family of God. We need to think not only of parishes as families, but of multiple parishes as extended families or “Families of Parishes,” as we move from maintenance to mission. Beacons of Light is a means for channeling our resources in a way that best serves the mission of evangelization.

What are characteristics of an evangelizing community? First, we are a Church that goes forth. We are missionaries. Going forth demands courageously leaving our comfort zone. In an interview in 2013, Pope Francis said:

“Instead of just being a church that welcomes and receives by keeping the doors open, let us try also to be a church that finds new roads, that is able to step outside itself and go to those who do not attend Mass, to those who have quit or are indifferent. The ones who quit sometimes do it for reasons that, if properly understood and assessed, can lead to a return. But that takes audacity and courage.” (Antonio Spadaro, Sept. 21, 2013)

Second, the community of missionary disciples shows initiative. The Spanish word primerear captures this idea of being proactive rather than reactive. In Evangeli Gaudium the Holy Father writes:

“An evangelizing community knows that the Lord has taken the initiative; He has loved us first, and therefore, we can move forward, boldly take the initiative, go out to others, seek those who have fallen away, stand at the crossroads and welcome the outcast.” (EG, 24)

Here in the Archdiocese of Cincinnati, we cannot afford to wait for people to come to us; rather, we must seize the initiative and become “spiritual entrepreneurs.”

Third, the evangelizing community is engaged with its members. Pope Francis sometimes uses the word balconear, which means to stand on the balcony to see what is happening without personal engagement. The Pope proposes Jesus as the opposite of this sort of person:

“Jesus washed the feet of His disciples. The Lord gets involved and He involves His own, as He kneels to wash their feet. He tells His disciples, ‘You will be blessed if you do this.’ An evangelizing community gets involved by word and deed in people’s daily lives; it bridges distances. It is willing to abase itself if necessary, and it embraces human life, touching the suffering flesh of Christ in others.” (EG, 24)

The priest cannot do everything. He must encourage his people to get involved by identifying and utilizing the talents and gifts of his flock.

Fourth, a community of missionary disciples accompanies others. Speaking in Assisi in 2013, Pope Francis said:

“I repeat it often: walking with our people, sometimes in front, sometimes in the middle, and sometimes behind: in front in order to guide the community, in the middle in order to encourage and support; and at the back in order to keep it united and so that no one lags too far behind, to keep them united.” (Pope Francis, Cathedral of San Ruffino, Assisi, Oct. 4, 2013)

A father of a family must lead his family, spend time with his family and offer encouragement, keeping the family together. Accompaniment entails guiding, encouraging, supporting and uniting. The pastor must lead the process, accompanying his own people, learning about their joys, sorrows, hopes and needs, and offering encouragement. This demands listening and empathizing on his part. At the same time, the parish community walks with him, with each member playing a role in strengthening each other, serving as bridges, rather than barriers, in a united effort to evangelize.

Fifth, the evangelizing community is fruitful. Commenting on the parable of the weeds and wheat, the Holy Father says:

“An evangelizing community is always concerned with fruit, because the Lord wants her to be fruitful. It cares for the grain and does not grow impatient with the weeds. The sower when he sees weeds sprouting among the grain does not grumble or overreact. He or she finds a way to let the word take flesh in a particular situation and bear fruits of new life, however imperfect or incomplete these may appear.” (EG, 24)

Fruitfulness demands discernment and patience. The parable of the weeds and wheat speaks of discerning what is from the Son of Man, who sows good seeds in the field, from the weeds, sown by the devil. In Greek, the word for weeds is zizania, which refers to rye grass. Zizania looks like wheat initially, but only when it is mature can one discern the difference. Jesus warns of the need to be patient and discerning because things are not always initially clear.

Patience and discernment allow us to move forward. It is particularly necessary for all of us to help the faithful understand why Beacons of Light is happening and to accept the reality of change.

The final characteristic of an evangelizing community is joy. The Eucharist is the sacrament of Christian joy. In the Eucharist, the joy Jesus has won is not only preserved and shared, but perdures. The Church celebrates the Eucharist with the spousal joy of one promised to Christ. It is a foretaste of the heavenly banquet.

Families of Parishes, nourished by the Holy Eucharist, will have the courage to go forth, to seize the initiative, to be engaged and to accompany others so they might bear lasting fruit. They will be evangelizing communities, marked by the joy that comes from the Gospel and the Eucharist. 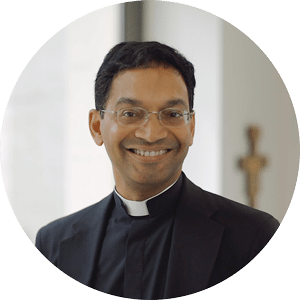 Fr. Earl Fernandes
Father Earl K Fernandes is the pastor of St. Ignatius of Loyola Church in Cincinnati and holds a doctorate in moral theology from the Alphonsian Academy in Rome.

Subscribe to Beacons Update for important information sent right to your email inbox.