Reverend Timothy S. Bunch died on Monday, June 14, 2021, in Cincinnati, Ohio. He was born on September 9, 1952, in Indianapolis, Indiana. He received his B.A. in Philosophy from St. Gregory Seminary in 1975 and his M.Div. in Theology from Mount St. Mary’s Seminary of the West, Norwood, in 1979. He was ordained on June 16, 1979, at St. Peter in Chains Cathedral by Archbishop Joseph L. Bernardin.

A Luncheon will be served in St. Saviour’s Undercroft following the Funeral Mass.

Archdiocese Plans for Families of Parishes 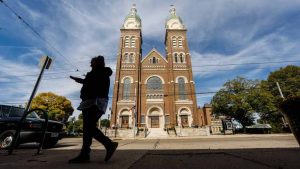